About 8,000 expected accredited persons are expected to attend the National Delegates’ Conference of the ruling New Patriotic Party, NPP in the Ashanti Regional capital Kumasi this weekend.

About 8,000 expected accredited persons are expected to attend the National Delegates’ Conference of the ruling New Patriotic Party, NPP in the Ashanti Regional capital Kumasi this weekend.

5,000 of them are Delegates from the Constituencies through the Regional to National Executives among other recognized party faithful.

The Ashanti regional capital of Kumasi will start receiving hundreds of visitors from within Ghana and abroad from Saturday, December 18, 2021 ahead of the eventual National Delegates’ Conference on Sunday. 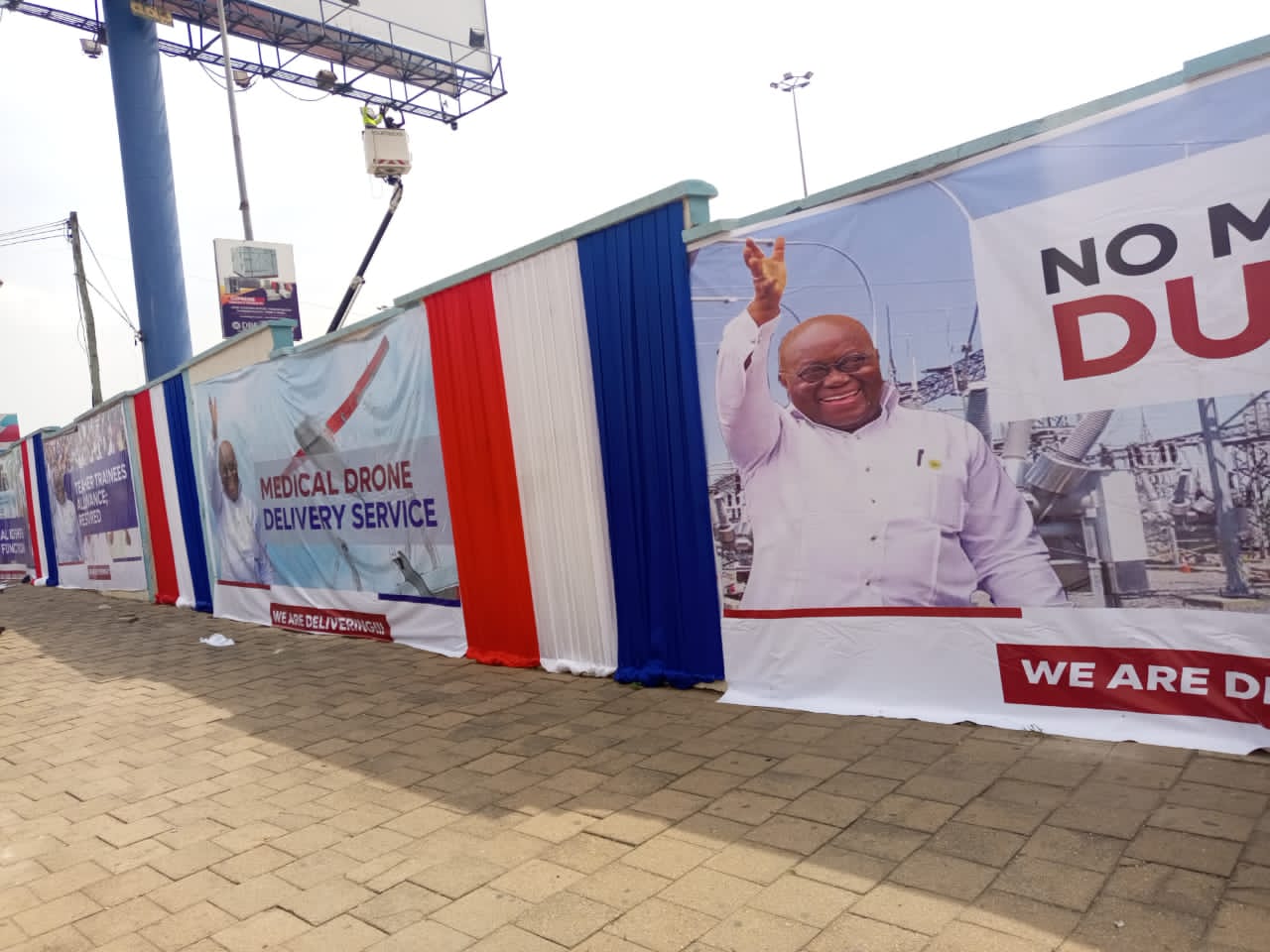 GBC’s Ashanti Regional Correspondent, Nicholas Osei-Wusu
gauging the mood in town, scanned the host city to find out the readiness of Kumasi to receive the large number of visitors.

The first consideration during a drive through Kumasi was to find out the level of compliance to an earlier party Executives’ Directive for the removal of promotional materials by party faithful to sell themselves to the delegates ahead of the NPP’s national and regional elections.

Some prominent members had started mounting personal promotional materials, notably giant billboards, at vantage points including major roundabouts and intersections to catch the attention of the delegates.

This however did not go down well with the party’s hierarchy, and explained that the tendency only distracts public attention from government’s policies and programmes which should rather be articulated by all.

The observation was that the directive largely, had been complied with. 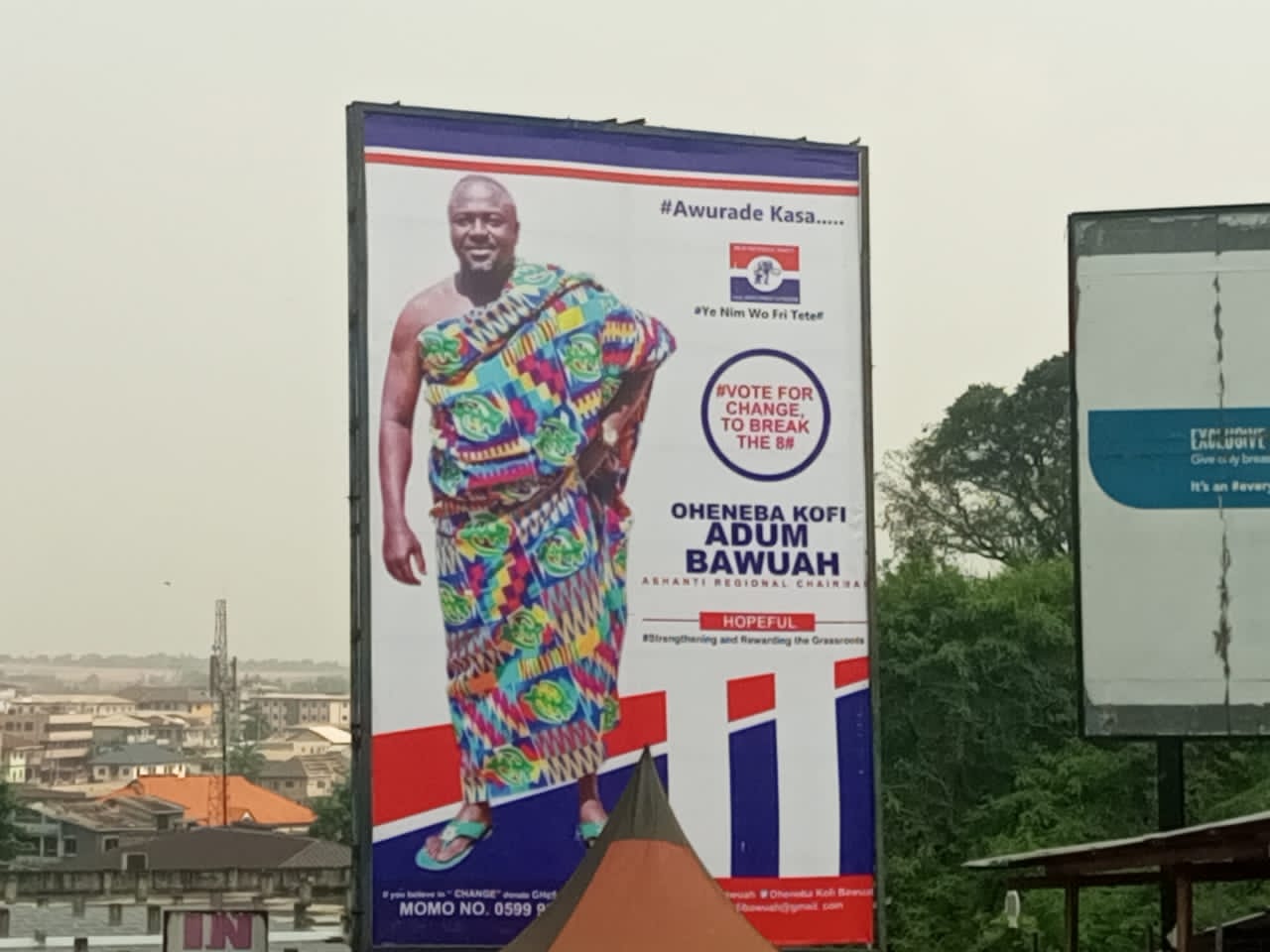 However, two of the giant promotional billboards were spotted.

The first one had the image of Vice President Dr. Mahamudu Bawumia and President Akufo-Addo ostensibly by the ‘Friends of Dr, Bawumia Movement’ mounted at the frontage of the Police Offices near the Suame Roundabout.

Another giant billboard with the image of one Oheneba Kofi Adu Bawua adorned in kente cloth with a message ‘Ashanti Regional Chairman Hopeful’, erected near the Nana Afua Kobi Ampem Roundabout at Manhyia.

Apart from these two, the only other banners spoted at vantage locations were those supposedly printed by the party advertising the National Delegates’ Conference scheduled for Sunday December 19, 2021. This had the images of former President J.A.Kuffuor, his vice, the late Alhaji Aliu Mahama, the incumbent President and vice, Nana Addo Dankwa Akufo-Addo and Dr. Mahamudu Bawumia, the National Chairman, General Secretary of the NPP, Mr. Freddie Blay and Mr. John Boadu embossed on the fringes sandwiching the event and it’s theme.

GBC News caught up with the National Youth Organizer of the NPP, Henry Nana Boakye to find out whether the Party Executives were aware of the situation.
He responded in the affirmative and indicated that by close of day, Friday December 17, 2021, the campaign materials would not be available. Nana ‘B’ as he is affectionately known, said that after speaking to ‘the Camp of Dr. Bawumia’, he was convinced that the ‘Vice President was not the least happy about the issue’.

On the readiness and preparation for the National Delegates’ Conference, principal streets leading to, and within Kumasi, were adorned with mini party flags hoisted on electricity poles. Banners designed with pictures of the President and some key government intervention policies had also been put up at the frontage of the Baba Yara Sports, venue for the programme, while the works being undertaken at the Heroes Park of the Stadium gave enough indication to any visitor that, an event was about to take place.

The National Youth Organizer of the NPP, Henry Nana Boakye, who is also a member of the Grounds Committee for the programme, told GBC News that preparations were about 70 % complete as at Friday afternoon.
He said accommodation had been secured for the delegates coming from outside the host city.

He cautioned that, only members with prove of having been vaccinated against COVID-19 would be admitted to the places of abode, in line with the party’s directive. Nana ‘B’ said a total of eight thousand persons including five thousand Delegates, invited guests, observers and the media were expected at the event on Sunday. 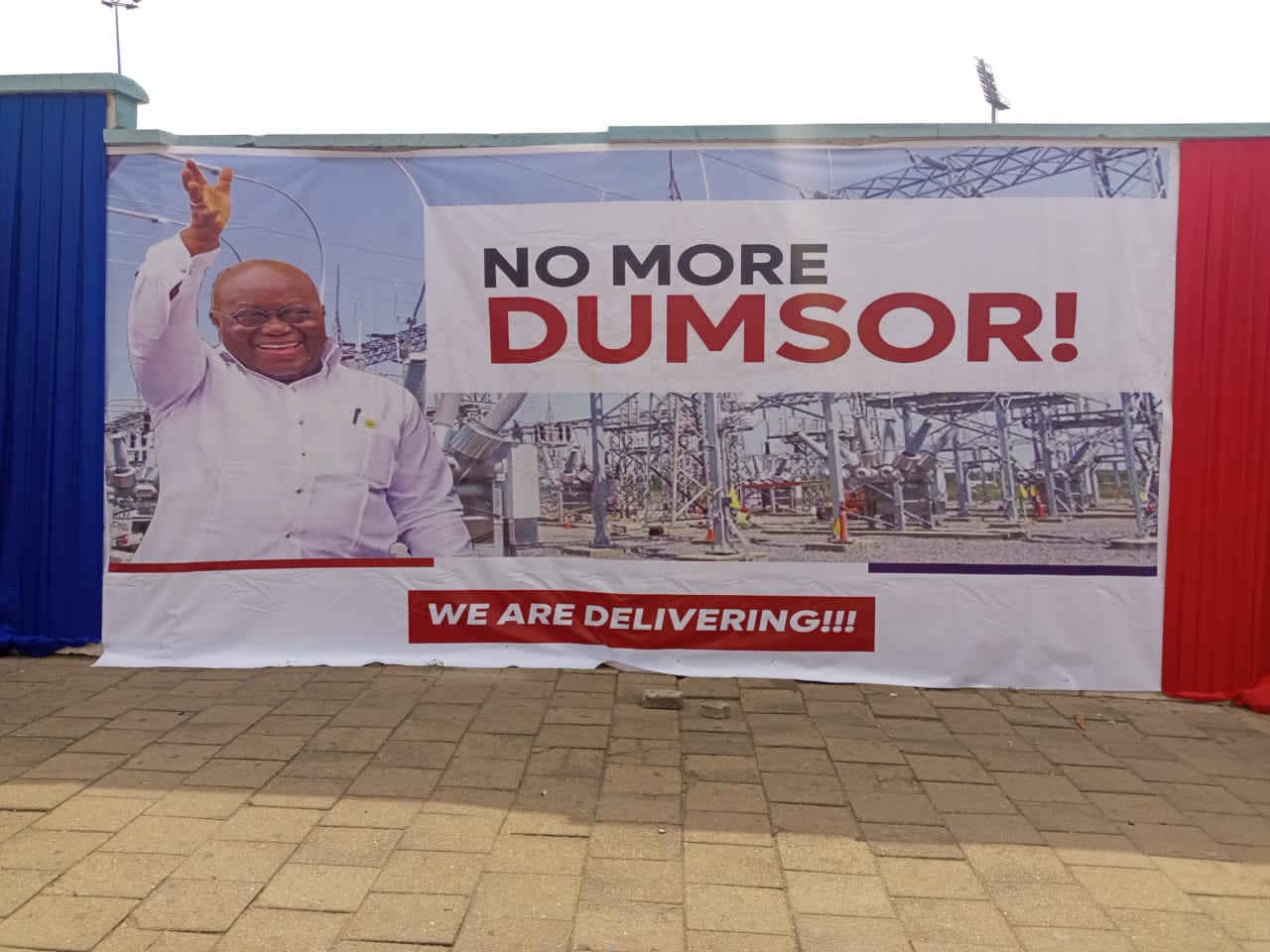 Touching on the event, the National Youth Organizer disclosed that the Conference will be in three parts. ‘The first part will be a church service followed by Conference Speeches. There will then be a break until a resumption at 3pm when Proposals for amendments of the party’s Constitution will follow’”, he indicated.

Already, traders not only around the Stadium but dealers in party paraphernalia traveling from far and near, some of whom have already secured posts, are upbeat about the economic prospects before, during and even after the main Conference on Sunday.

Two of them, Madam Rose Antwi, a food vendor, and Nana Akua Adwubi, a petty trader told GBC News that they expect to make good sales during the period.

For them, this, would translate into a better Christmas celebration.