However, this decision was challenged by the Krontihene of New Juaben Barfuor Nyantakyi Tutu Boateng who described it as uncustomary.

He requested that proper procedure is followed to institute a caretaker chief from the New Juaben Traditional Council. The request was turned down.

The Krontihene rose to invoke the great oath of Otumfuor Osei Tutu to express his disapproval to the decision by the Juabenhene.

This created confusion at the meeting as the traditional entourage of the Juabenhene rushed to eject the Krontihene from the meeting.

“I invoked the Great oath of Asantehene on Nana Otuo Serebuor II, for the uncustomary imposition of himself as the interim Omanhene of New Juaben, while at same time saying that the New Juaben Traditional Council issues are not why he came to Koforidua , which to me smacks of dishonesty. Because of the invocation of the oath, they insisted that I leave the Palace and for the sake of peace I left. But this is not the end of the matter, I will push for the case to reach Otumfou for arbitration. Nana Otuo Siriboe II cannot impose himself on New Juaben. I will always boldly speak my mind anytime anywhere”. 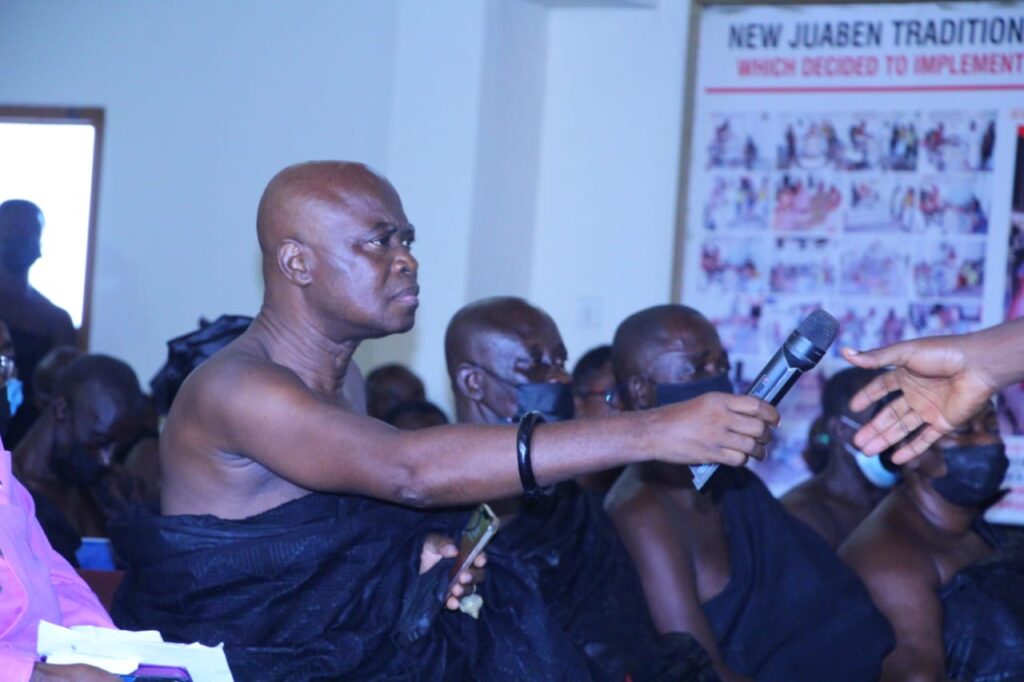 Daasebre Otuo Serebuor subsequently said he will not report the invocation of the great oath of Otumfuo for the sake of peace, however, banned the Krontihene from any meeting whatsoever about the funeral and burial of the late Daasebre Oti Boateng.

After endorsement by Chiefs and other invited dignitaries present, Daasebre Otuo Serebuor immediately formed committees including finance, protocol, Security, Hospitality, publicity among others entrusted with various responsibilities to help organize a befitting 40-day celebration and subsequently the burial and final funeral rites .

Daasebre Otuo Serebuor II is chairman for all the committees .

There was heavy security presence at the palace .

Also present at the meeting were sub-chiefs and Queenmothers of New Juaben, the two members of Parliament for New Juaben North and South ,Nana Adjei Boateng and Michael Okyere Baafi respectively, MCE for New Juaben South Ike Appaw Gyasi , and some industrious sons and daughters of the land as well as some clergymen