President Nana Akufo-Addo has appointed Broadcaster Paul Adom Otchere as Chairperson of the Board of Directors of Ghana Airport Company Limited.

President Nana Akufo-Addo has appointed Broadcaster Paul Adom Otchere as Chairperson of the Board of Directors of Ghana Airport Company Limited. 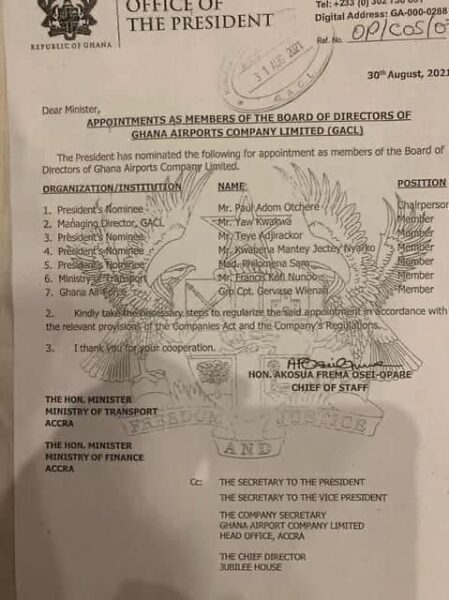 Ghana Airports Company Limited (GACL) is a state-owned company with responsibility for developing, maintaining, planning and managing airports in Ghana.

It was registered in 2006 and presently manages airports such as Kotoka International Airport, Wa Airport, Tamale Airport, Sunyani Airport, Ho Airport, Kumasi Airport and other airstrips in Ghana.

It was established by result of the decoupling of the existing Ghana Civil Aviation Authority (GCAA) which was in line with current trends that are in the aviation industry.

The GACL assumed some functions of the GCAA and also managing the airports after the amendment of the GCAA Act 2004, which was renewed on 12 April 2007 and was licensed for continuous term of 7 years. The company started business on 1 January 2007.

The GACL constructed the Terminal 3 at the KIA in March 2016 and was completed in June 2018 and was opened to the public after 3 months.

It was claimed about US$350million was spent on the building of the Terminal 3 and other projects at KIA.

The construction of a new runway at the Tamale Airport also was claimed to have cost about US$130million. Also, about US$25million was used for the building of a new airport at Ho in the Volta region of Ghana