The First Lady, Mrs. Rebecca Akufo-Addo, has said she can not accept the emoluments approved for her by Parliament.

The First Lady, Mrs. Rebecca Akufo-Addo, has said she can not accept the emoluments approved for her by Parliament.

This was captured in a statement signed by Korkor Bleboo, Director of Communications at the Office of the First Lady.

“The First Lady in consultation with the President of the Republic has decided to refund all the monies paid to her as allowances from the date of the President’s assumption of office, i.e., from January 2017 to date, amounting to GHS899,097.84.”

“The First Lady has also decided not to accept any monies that have been allocated to be paid to her pursuant to the recommendations of the Ntiamoa-Baidu committee, as approved by Parliament. She is doing this as a purely personal decision, without prejudice to the rights of others, and not to undermine the propriety of the process undertaken by Parliament.”

In the statement, Mrs. Akufo-Addo’s Director of Communications argued that the First Lady did not request to be paid any allowance and that “She only received that which existed and attached to her status, albeit informally.”

According to the statement, the wife of the president took the decision because the discussions that greeted the announcement of the allowance payments have been laced with some extremely negative opinions, which she finds distasteful as such commentaries only seek “to portray her as a venal, self-seeking and self-centered woman, who does not care about the plight of the ordinary Ghanaian.”

The First Lady’s action comes on the back of the backlash government had received after it came to the fore that, a recommendation for the First and Second Ladies to receive monthly salaries had already been approved by Parliament.

Ghanaians were further livid because it was disclosed that, the First and Second Ladies will be receiving salaries equivalent to cabinet ministers.

The recommendations were made by the five-member Professor Yaa Ntiamoa-Baidu committee set up in June 2019 by President Nana Akufo-Addo to make recommendations on the salaries and other gratuities of Article 71 officeholders. 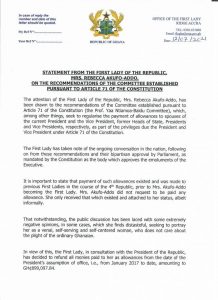 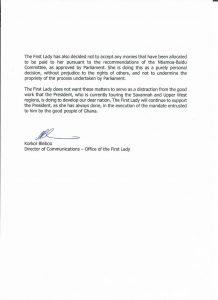